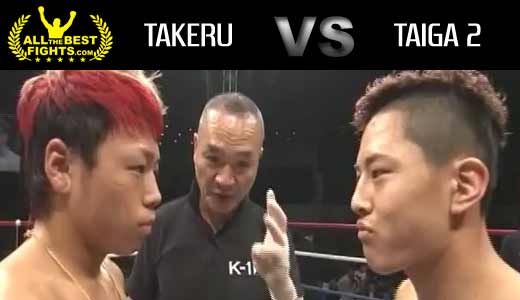 Review by AllTheBestFights.com: 2015-04-19, two very young kickboxers in a very exciting battle thanks to an outstanding performance by both fighters (they had already fought twice the same night), some tremendous exchanges and a nonstop pace: the second fight between Takeru and Taiga is the first candidate for kickboxing Fight of the Year 2015 and it gets five stars!

Takeru (red and yellow hair) entered this fight with a professional kickboxing record of 17-1-0 (10 knockouts) while his opponent, the 18-year-old Taiga (five years younger than Takeru), has an official record of 9-1-0 (1 knockout) and he suffered his only defeat in 2014 when he faced Takeru for the first time. Takeru vs Taiga 2 is the final of the K-1 World GP 2015 -55kg championship tournament; Takeru beat Alexandre Prilip in the quarterfinals and Shota Takiya in the semifinals while Taiga won over Soufiane El Haji and Nobuchika Terado. Watch the video and rate this fight!