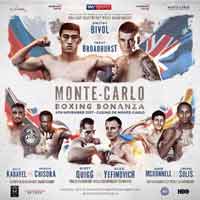 Review by AllTheBestFights.com: 2017-11-04, fight not so exciting between Agit Kabayel and Dereck Chisora: it gets two stars.

Dereck Chisora entered this fight with a pro boxing record of 27-7-0 (19 knockouts) and he is ranked as the No.21 heavyweight in the world. He lost to Dillian Whyte last year (=Chisora vs Whyte) but he came back to win in 2017 with Robert Filipovic.
His opponent, the undefeated Agit Kabayel, has a perfect record of 16-0-0 (12 KOs=75%) and he entered as the No.32 in the same weight class. In his last three bouts he has beat Lawrence Tauasa, Christian Lewandowski and Herve Hubeaux. Chisora vs Kabayel is valid for the EBU (European) heavyweight title; undercard of Dmitry Bivol vs Trent Broadhurst. Watch the video and rate this fight!