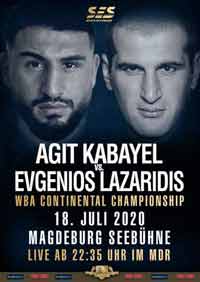 Review by AllTheBestFights.com: 2020-07-18, pretty good fight between Agit Kabayel and Evgenios Lazaridis: it gets three stars.
The undefeated Agit Kabayel entered this fight with a perfect boxing record of 19-0-0 (13 knockouts) and he is ranked as the No.28 heavyweight in the world. In his last three bouts he has won over Dereck Chisora (Dereck Chisora vs Agit Kabayel), Miljan Rovcanin and Andriy Rudenko (Agit Kabayel vs Andriy Rudenko).
His opponent, Evgenios Lazaridis, has an official record of 16-2-0 (10 knockouts) and he entered as the No.101 in the same weight class. He lost to Samuel Kadje in 2018 but then he has won four bouts defeating Denis Bakhtov and Kostiantyn Dovbyshchenko in his last two. Kabayel vs Lazaridis is valid for the vacant WBA Continental heavyweight title. Watch the video and rate this fight!