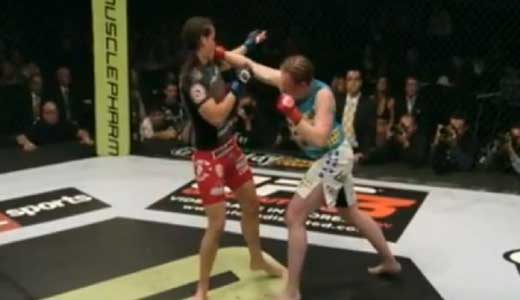 Review: 2012-03-03, very nice and tough fight with some amazing exchanges: the second fight between Sarah Kaufman and Alexis Davis gets four stars. Sarah Kaufman (14-1-0) entered as the No.2 women’s bantamweight in the world while Alexis Davis (11-4-0) entered as the No.4. Kaufman vs Davis 2 is on the undercard of Miesha Tate vs Ronda Rousey (Strikeforce); in their first fight (April 7, 2007) Kaufman defeated Davis by TKO but they also faced each other a third time on April 25, 2015 (=Davis vs Kaufman 3). Watch the video!