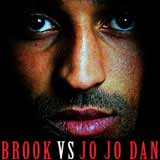 Review by AllTheBestFights.com: 2015-03-28, fight not so exciting between Kell Brook and Ionut Dan Ion: it gets two stars.

The undefeated Kell Brook entered this fight with a perfect boxing record of 33-0-0 (22 knockouts) and he is ranked as the No.5 welterweight in the world (currently the #1 in this division is Floyd Mayweather Jr); he fought twice last year beating Alvaro Robles (=Brook vs Robles) and Shawn Porter winning the Ibf Ww belt (=Porter vs Brook).
His opponent, Ionut Dan Ion (also known as Jo Jo Dan), has an official record of 34-2-0 (18 knockouts) and he entered as the No.19 in the same weight class; he suffered both his two defeats against Selcuk Aydin, in 2010 and in 2011 (=Aydin vs Dan Ion 2). After the second loss Jo Jo Dan has won five consecutive bouts, beating Kevin Bizier in his last fight (=Dan Ion vs Bizier 2). Brook vs Dan Ion is valid for the IBF world welterweight title (Brook’s first defense). Watch the video and rate this fight!