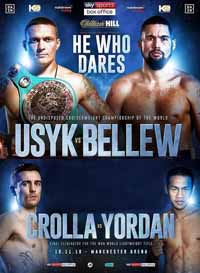 Review by AllTheBestFights.com: 2018-11-10, good start between Josh Kelly and Walter Castillo: it gets three stars.

The undefeated former Olympian Josh Kelly entered this fight with a perfect boxing record of 7-0-0 (5 knockouts) and he is ranked as the No.24 welterweight in the world. In his last three bouts he has won over Jean Michel Hamilcaro, Carlos Molina (Josh Kelly vs Carlos Molina) and Kris George (Josh Kelly vs Kris George).
His opponent, Walter Fabian Castillo, has a record of 13-2-0 (3 knockouts) and he entered as the No.249 in the same weight class but he lost two out of his last three fights, against Leonardo Fabio Amitrano and Diego Ramirez but then he has defeated Pablo David Battista. Kelly vs Castillo is on the undercard of Oleksandr Usyk vs Tony Bellew. Watch the video and rate this fight!