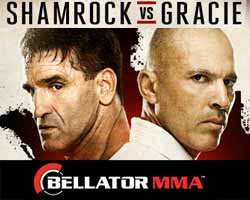 Review by AllTheBestFights.com: 2016-02-19, disappointing fight between Ken Shamrock and Royce Gracie: it gets two stars.

The former Ufc Superfight, Pride and King of Pancrase champion Ken Shamrock entered this fight with a record of 28-16-2 (89% finishing rate) but now he is 52 years old (three years older than Gracie) and he fought just once since the end of 2010: he lost to Kevin ‘Kimbo Slice’ Ferguson last year (=Kimbo Slice vs Ken Shamrock).
His opponent, the 6th degree black belt in Gracie jiu-jitsu and winner of three Ufc tournament Royce Gracie, has a mma record of 14-2-3 (86% submission victory rate – he has never won by ko/tko) but he is not ranked as he hasn’t fought since June 2, 2007 when he defeated Kazushi Sakuraba; before this bout he had lost to Matt Hughes. In their first fight ‘The World’s Most Dangerous Man’ Shamrock lost to Gracie by submission in just 57 seconds (November 12, 1993 – UFC 1) while their second bout ended in a draw (April 7, 1995 – UFC 5). Gracie vs Shamrock 3 is the main event of Bellator 149. Watch the video and rate this fight!