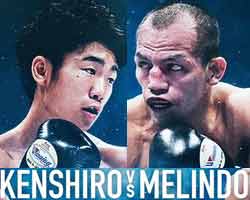 Review by AllTheBestFights.com: 2018-10-07, pretty good fight between Ken Shiro and Milan Melindo: it gets three stars.

The undefeated Wbc light-Flw champion Ken Shiro entered this fight with a perfect boxing record of 13-0-0 (7 knockouts) and he is ranked as the No.1 light flyweight in the world. In his last three fights he has beat Pedro Guevara (Shiro vs Guevara), Gilberto Pedroza (Ken Shiro vs Gilberto Pedroza) and Ganigan Lopez (Ken Shiro vs Ganigan Lopez 2).
His opponent, the former Ibf light-Flw champ Milan Melindo, has an official record of 37-3-0 (13 knockouts) and he entered as the No.6 in the same weight class but he comes off the loss against Ryoichi Taguchi (Milan Melindo vs Ryoichi Taguchi); before this bout, in 2017, he had defeated Akira Yaegashi in May (Yaegashi vs Melindo) and Hekkie Budler in September (Melindo vs Budler). Ken Shiro vs Melindo is valid for the WBC World light flyweight title (Shiro’s fourth defense); undercard of Naoya Inoue vs Juan Carlos Payano. Watch the video and rate this fight!