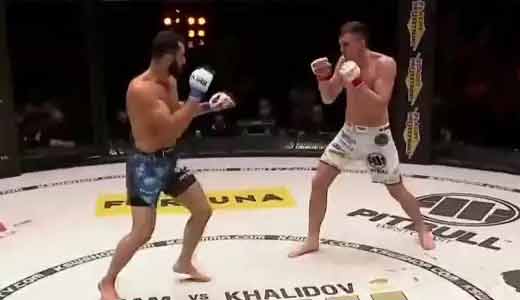 Review by AllTheBestFights.com: 2020-10-10, spectacular finish between between Scott Askham and Mamed Khalidov 2: this is one of the best mma fights of 2020 and it gets four stars!
The black belt in Bjj and current KSW Mw champi Scott Askham entered this fight with a professional record of 19-4-0 (74% finishing rate) and he is ranked as the No.12 middleweight in the world. He lost two consecutive fights between 2016 and 2017, against Jack Hermansson and Bradley Scott, but then he has won five bouts defeating Marcin Wojcik, Michal Materla (Michal Materla vs Scott Askham 2) and Mamed Khalidov in his last three (Scott Askham vs Mamed Khalidov I).
His opponent, the black belt in karate, tae-kwon-do and former KSW champion in two weight classes Mamed Khalidov, has a mma record of 34-7-2 (88% finishing rate) and he entered as the No.66 in the same weight class. Before his last fight, in which he was defeated by Askham, he had also lost two consecutive bouts, both against Tomasz Narkun (Mamed Khalidov vs Tomasz Narkun I and Tomasz Narkun vs Mamed Khalidov 2). Khalidov vs Askham 2, main event of Ksw 55, is valid for the KSW middleweight title. Watch the video and rate this fight!