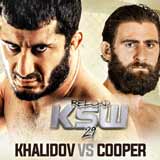 Review: 2014-12-06, pretty good fight between Mamed Khalidov and Brett Cooper: it gets three stars. The black belt in karate and tae-kwon-do Mamed Khalidov entered this fight with a professional mma record of 29-4-2 (97% finishing rate) and he is ranked as the No.17 middleweight in the world, he suffered his last defeat in 2010 when he faced Jorge Santiago, since then he has collected nine victories and one draw; he beat Maiquel Falcao in his last bout (=Khalidov vs Falcao).
His opponent, Brett Cooper, has an official record of 20-10-0 (75% finishing rate) and he entered as the No.45 in the same weight class, he has fought twice in 2014 beating Kendall Grove (=Cooper vs Grove) but then he lost to Brandon Halsey (=Cooper vs Halsey). Khalidov vs Cooper is the main event of Ksw 29. Watch the video and rate this fight!

Video:
(Free embeddable video hosted on Vimeo.com and not uploaded by AllTheBestFights, to report it please visit this link where the video is hosted)