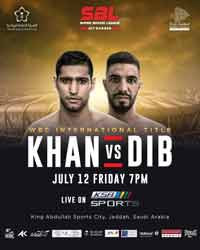 Review by AllTheBestFights.com: 2019-07-12, one sided fight between Amir Khan and Billy Dib: it gets two stars.

The former Olympian and former world champion Amir Khan entered this fight with a boxing record of 33-5-0 (20 knockouts) and he is ranked as the No.9 welterweight in the world but he comes off the loss against current #1 Ww Terence Crawford (Terence Crawford vs Amir Khan). Before this bout, in 2018, he had beat Phil lo Greco in April (Amir Khan vs Phil Lo Greco) and Samuel Vargas in September (Amir Khan vs Samuel Vargas).
His opponent, the former Ibf Fw and Ibo super-Fw champ Billy Dib, has an official record of 45-5-0 (26 knockouts) and he entered as the No.47 featherweight. He lost to Tevin Farmer last year (Tevin Farmer vs Billy Dib) but he came back to win against Surachet Tongmala in 2019. Khan vs Dib is valid for the vacant WBC International welterweight title. Watch the video and rate this fight!