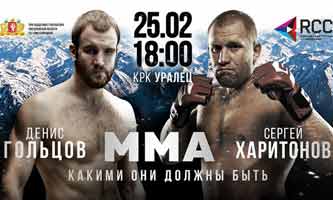 Review by AllTheBestFights.com: 2018-02-25, disappointing fight between Sergei Kharitonov and Joey Beltran: it gets two stars.

Sergei Kharitonov entered this fight with a professional mma record of 26-6-0 (96% finishing rate) and he is ranked as the No.25 heavyweight in the world. He lost to Javy Ayala in 2016 (Kharitonov vs Ayala) but then he has won over Chase Gormley (Kharitonov vs Gormley), Rameau Thierry Sokoudjou (Kharitonov vs Sokoudjou) and Geronimo dos Santos (Sergei Kharitonov vs Geronimo dos Santos).
His opponent, Joey Beltran, has an official record of 17-14-0 (82% finishing rate) but he is not ranked as he hasn’t fought since December 10, 2016 when he was defeated by Alessio Sakara (Alessio Sakara vs Joey Beltran). Kharitonov vs Beltran is on the undercard of Denis Goltsov vs Atanas Djambazov – RCC. Watch the video and rate this fight!

(Free embeddable video hosted on Youtube and not uploaded by AllTheBestFights)
https://www.youtube.com/watch?v=xtw4O-p5N6o