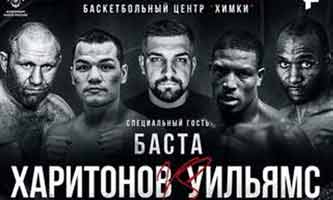 Review by AllTheBestFights.com: 2020-09-11, fight not particularly good between Sergei Kharitonov and Danny Williams: it gets two stars.
The mixed martial artist Sergei Kharitonov entered this fight with a pro mma record of 30-7-0 (93% finishing rate) and he is ranked as the No.22 mma heavyweight in the world but he is at his professional boxing debut. He lost to Linton Vassell last year (Sergei Kharitonov vs Linton Vassell) but he comes back to win against Fernando Rodrigues Jr in 2020 (Sergei Kharitonov vs Fernando Rodrigues Jr).
His opponent, Danny Williams, has a record of 54-28-0 (41 KOs=76% finishing rate) and he entered as the No.309 boxing heavyweight. He fought four times last year beating Boban Filipovic and Mehmed Crnalic but between these two bouts he lost to Ruslan Myrsatayev and Kristaps Zutis; Williams is one of the six boxers who defeated the undisputed world champion Mike Tyson in 2004 (Danny Williams vs Mike Tyson). Williams vs Kharitonov is the main event of the evening. Watch the video and rate this fight!