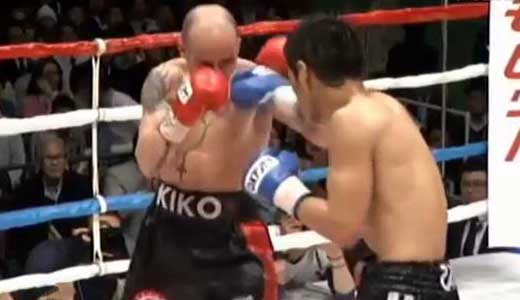 Review: 2014-04-23, tremendous exchanges, very high pace, three knockdowns: this toe-to-toe battle between Kiko Martinez and Hozumi Hasegawa is definitely one of the best boxing fights of 2014 and it gets four stars. Kiko Martinez entered this fight with a pro boxing record of 30-4-0 (22 knockouts) and he is ranked as the No.3 super bantamweight in the world, he fought four times in 2013 losing only his first bout against Carl Frampton in February (=Frampton vs Martinez) but in August he managed to defeat Jhonatan Romero winning the Ibf super-Bw belt (=Romero vs Martinez), after this fight he successfully defended the title once against Jeffrey Mathebula (=Martinez vs Mathebula).
His opponent, Hozumi Hasegawa, has a record of 33-4-0 (15 knockouts) and he entered as the No.24 in the same weight class (currently the #1 in this division is Guillermo Rigondeaux). Hasegawa has won world titles in two different weight classes but his last world title fight was in 2011 and he lost to Jhonny Gonzalez (=Gonzalez vs Hasegawa), since then he has collected four consecutive wins. Martinez vs Hasegawa is valid for the IBF super bantamweight title (Martinez’s second defense); undercard of Shinsuke Yamanaka vs Stephane Jamoye. Watch the video and rate this fight!