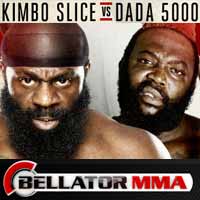 Review by AllTheBestFights.com: 2016-02-19, fight not particularly good between Kimbo Slice and Dada 5000 Harris: it gets two stars.

Kevin ‘Kimbo Slice’ Ferguson entered this fight with a professional mma record of 5-2-0 (80% finishing rate) while his opponent, Dhafir ‘Dada 5000’ Harris, has an official record of 2-0-0 (2 knockouts). Kimbo suffered his last loss in 2010 when he faced Matt Mitrione but since then he has fought and won just once, against Ken Shamrock last year (=Kimbo vs Shamrock), while Dada 5000’s last fight occurred in 2011 when he defeated Tim Papp. Kimbo vs Dada 5000 is on the undercard of Ken Shamrock vs Royce Gracie 3 – Bellator 149. Watch the video and rate this fight!