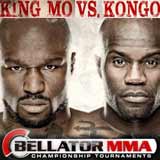 Review by AllTheBestFights.com: 2015-02-27, fight not so exciting between Muhammed Lawal and Cheick Kongo: it gets two stars.

The former Strikeforce light-Hw champion Muhammed ‘King Mo’ Lawal entered this fight with a pro mma record of 14-4-0 (79% ko/tko victory rate – he has never won via submission) and he is ranked as the No.15 light heavyweight in the world; he suffered his last defeat last year when he faced Quinton ‘Rampage’ Jackson in the final of the Bellator light-Hw tournament (=Jackson vs Lawal). After this bout he came back to win beating Dustin Jacoby (=Lawal vs Jacoby) and Joe Vedepo (=Lawal vs Vedepo).
His opponent, the black belt in karate and kendo Cheick Kongo, has an official record of 22-9-2 (73% finishing rate) and he entered as the No.18 heavyweight; he lost in 2014 as well, against Vitaly Minakov (bout valid for the Bellator Hw title, Minakov vs Kongo), but then he defeated Eric Smith and Lavar Johnson (=Kongo vs Johnson). Lawal vs Kongo is on the undercard of Emanuel Newton vs Liam McGeary – Bellator 134. Watch the video and rate this fight!