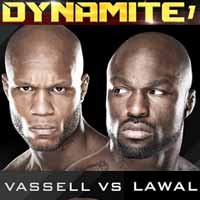 Review by AllTheBestFights.com: 2015-09-19, disappointing fight between Muhammed Lawal and Linton Vassell: it gets two stars.

The former Strikeforce light-Hw champion Muhammed ‘King Mo’ Lawal entered this fight with a professional record of 15-4-0 (73% ko/tko victory rate – he has never won via submission) and he is ranked as the No.15 light heavyweight in the world. He lost to Quinton ‘Rampage’ Jackson last year (=Rampage vs Lawal) but after this bout he has won three consecutive fights defeating Cheick Kongo in his last one (=Lawal vs Kongo).
His opponent, Linton Vassell, has the same record of 15-4-0 (87% finishing rate) and he entered as the No.24 in the same weight class. He suffered his last defeat in 2014 as well, against Emanuel Newton (=Newton vs Vassell), but then he came back to win in 2015 beating Rameau Thierry Sokoudjou (=Vassell vs Sokoudjou). Lawal vs Vassell is the semifinal of the Bellator light heavyweight tournament; undercard of Liam McGeary vs Tito Ortiz – “Bellator 142 Dynamite 1”. Watch the video and rate this fight!