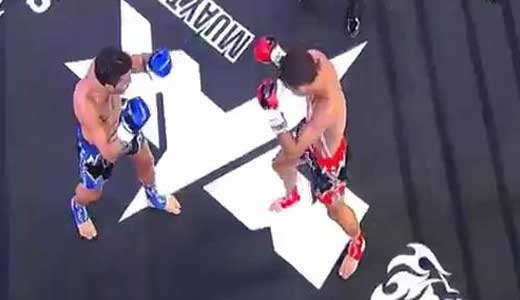 Review: 2014-03-29, good start, some tough exchanges and one of the best KOs of the year: Mehdi Zatout vs Mike ‘300’ Demetriou gets four stars!! Mehdi Zatout entered this fight with a professional kickboxing record of 72-29-1, he is the current Wbc welterweight muay thai champion (147 lbs, 66.7 kg) having defeated Singmanee Kaewsamrit via unanimous decision on September 7, 2013; after this title-fight he lost two bouts: against Fabio Pinca in October and then to Houcine Bennoui (January 2014).
His opponent, Mike ‘300’ Demetriou (real name Michael Demetriou), has an official record of 32-14-0 and he was the WMC middleweight Australian champion. Zatout vs Demetriou is the semifinal of MAX Muay Thai 7 four man tournament (-67kg); in the other semifinal Jomthong Chuwattana defeated Naimjon Tuhtobaev and then the Thai fighter won also the final (but both fights were not so exciting and we don’t post them); undercard of Aikpracha Meenayothin vs Youssef Boughanem 2. Watch the video and rate this fight!

Where: The Stage (Asiatique), Bangkok, Thailand