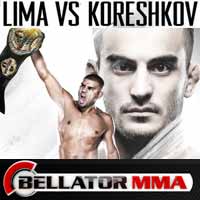 Review by AllTheBestFights.com: 2015-07-17, fight not so exciting between Douglas Lima and Andrey Koreshkov: it gets two stars.

Douglas Lima entered this fight with a professional mma record of 26-5-0 (88% finishing rate) but he is not ranked as he hasn’t fought since April 18, 2014 when he defeated Rick Hawn in a fight valid for the vacant Bellator Ww title (=Lima vs Hawn).
His opponent, Andrey Koreshkov, has an official record of 17-1-0 (76% finishing rate) and he entered as the No.16 welterweight in the world. Both fighters suffered their last loss against Ben Askren: Lima in 2012 (=Askren vs Lima) while Koreshkov in 2013 (=Askren vs Koreshkov); after this bout the Russian has won four bouts beating Adam McDonough (=Koreshkov vs McDonough). Lima vs Koreshkov, main event of Bellator 140, is valid for the Bellator welterweight title (Lima’s first defense); they also faced each other a second time on November 10, 2016 (=Andrey Koreshkov vs Douglas Lima 2). Watch the video and rate this fight!