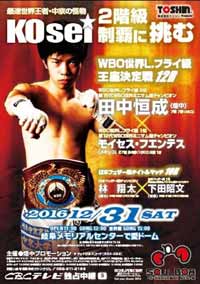 Review by AllTheBestFights.com: 2016-12-31, pretty good fight between Kosei Tanaka and Moises Fuentes: it gets three stars.

The former world champion in two different weight classes Moises Fuentes entered this fight with a record of 24-2-1 (13 knockouts) and he is ranked as the No.6 light flyweight in the world (currently the #1 in this division is Ganigan Lopez). He suffered his last loss when he faced Donnie Nietes in 2014 (=Nietes vs Fuentes 2), after this fight he has won five bouts beating Rommel Asenjo in 2016 (=Fuentes vs Asenjo).
His opponent, the undefeated former Wbo minimumweight champion Kosei Tanaka, has a perfect boxing record of 7-0-0 (4 knockouts) and he entered as the No.37 flyweight. He has fought once in 2016 winning over Rene Patilano (=Tanaka vs Patilano). Fuentes vs Tanaka is valid for the vacant WBO World light flyweight title. Watch the video and rate this fight!