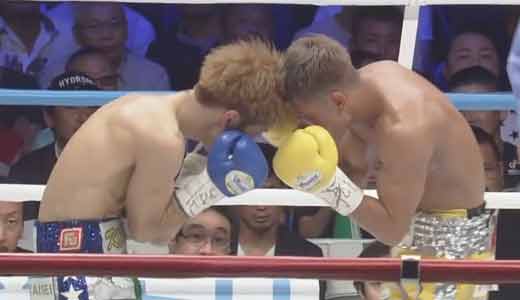 Review by AllTheBestFights.com: 2018-09-24, epic japanese war thanks to an impressive performance by both boxers: Sho Kimura vs Kosei Tanaka is the best boxing fight of 2018 so far and it gets four stars!

The Wbo Flw champion Sho Kimura entered this fight with a professional boxing record of 17-1-2 (10 knockouts) and he is ranked as the No.5 flyweight in the world (currently the #1 in this division is Cristofer Rosales). He suffered his only defeat at his pro boxing debut in 2013, against Shosuke Oji, since then he has collected 17 victories and two draws beating Zou Shiming (Shiming vs Kimura), Toshiyuki Igarashi (Sho Kimura vs Toshiyuki Igarashi) and Froilan Saludar in his last three (Sho Kimura vs Froilan Saludar).
His opponent, the undefeated world champion in two different weight classes Kosei Tanaka, has a perfect record of 11-0-0 (7 knockouts) and he entered as the No.2 in the same weight class. In his last three bouts he has won over Angel Acosta (Tanaka vs Acosta), Palangpol CP Freshmart (Kosei Tanaka vs Palangpol CP Freshmart) and Ronnie Baldonado (Kosei Tanaka vs Ronnie Baldonado). Kosei vs Kimura is valid for the WBO World flyweight title (Kimura’s third defense). Watch the video and rate this fight!

(Free embeddable video hosted on Youtube and not uploaded by AllTheBestFights)
https://www.youtube.com/watch?v=vXh8YzyJ-rE