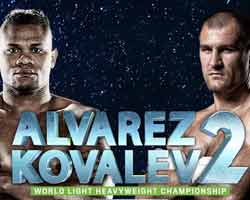 Review by AllTheBestFights.com: 2019-02-02, some good exchanges between Eleider Alvarez and Sergey Kovalev 2 but it is not enough to get three stars: it gets two.

The undefeated former Olympian and current WBO light-Hw champion Eleider Alvarez entered this fight with a perfect record of 24-0-0 (12 knockouts) and he is ranked as the No.2 light heavyweight in the world (currently the #1 in this division is Oleksandr Gvozdyk). In his last three bouts he has won over Lucian Bute (Alvarez vs Bute), Jean Pascal (Eleider Alvarez vs Jean Pascal) and Sergey Kovalev (the Russian was ahead on points but he was knocked out in the seventh round, Sergey Kovalev vs Eleider Alvarez I).
His opponent, the former Wbo and Iba light-Hw champ Sergey Kovalev, has a boxing record of 32-3-1 (28 KOs=87%) and he entered as the No.7 in the same weight class. Before losing to Alvarez in August 2018 he had beat Igor Mikhalkin in March (Sergey Kovalev vs Igor Mikhalkin) and Vyacheslav Shabranskyy in November 2017 (Sergey Kovalev vs Vyacheslav Shabranskyy). Alvarez vs Kovalev 2 is valid for the WBO World light heavyweight title (Alvarez’s first defense). Watch the video and rate this fight!

Their previous fight: Sergey Kovalev vs Eleider Alvarez I