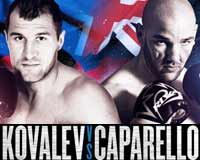 Review: 2014-08-02, pretty good fight between Sergey Kovalev and Blake Caparello: it gets three stars. Both undefeated, Sergey Kovalev entered this fight with a professional boxing record of 24-0-1 (22 KOs=91%) and he is ranked as the No.3 light heavyweight in the world (currently the #1 in this division is Adonis Stevenson), he won the Wbo ligh-Hw belt in 2013 defeating Nathan Cleverly (=Cleverly vs Kovalev) and then he defended the title twice: against Ismayl Sillakh in 2013 (=Kovalev vs Sillakh) and against Cedric Agnew in 2014 (=Kovalev vs Agnew).
His opponent, Blake Caparello, has an official record of 19-0-1 (6 knockouts) and he entered as the No.9 in the same weight class, he won the Ibo light-Hw title last year beating Allan Green and he defeated Elvir Muriqi in 2014 in his first fight in the USA (=Caparello vs Muriqi). Kovalev vs Caparello is valid for the WBO light heavyweight title (Kovalev’s third defense). Watch the video and rate this fight!