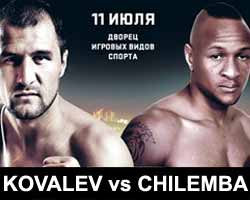 Review by AllTheBestFights.com: 2016-07-11, pretty good fight between Sergey Kovalev and Isaac Chilemba: it gets three stars.

The undefeated Wbo, Wba and Ibf champion Sergey Kovalev entered this fight with a pro record of 29-0-1 (26 KOs=90%) and he is ranked as the No.1 light heavyweight in the world. In his last two bouts he beat Nadjib Mohammedi (=Kovalev vs Mohammedi) and Jean Pascal in their rematch (=Kovalev vs Pascal 2).
His opponent, the former Ibo super-Mw champion Isaac Chilemba, has an official boxing record of 24-3-2 (10 knockouts) and he entered as the No.13 in the same weight class. He fought twice last year beating Vasily Lepikhin (=Chilemba vs Lepikhin) but then he lost to Eleider Alvarez (=Alvarez vs Chilemba). Kovalev vs Chilemba is valid for the WBA, IBF and WBO World light heavyweight titles (all held by Kovalev). Watch the video and rate this fight!

(Alternative free embeddable video hosted on Youtube and not uploaded by AllTheBestFights, to report it please visit this link where the video is hosted)