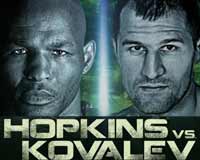 Review: 2014-11-08, great finish but the rest of the fight was not so exciting: Bernard Hopkins vs Sergey Kovalev gets two stars. The 49-year-old Bernard Hopkins (18 years older than Kovalev) entered this fight with a professional boxing record of 55-6-2 (32 knockouts) and he is ranked as the No.4 light heavyweight in the world (currently the #1 in this division is Adonis Stevenson); he suffered his last defeat in 2012 when he faced Chad Dawson in their rematch (via majority decision, Dawson vs Hopkins 2), after that bout he has won three consecutive fights, the last one against Beibut Shumenov (=Hopkins vs Shumenov).
His opponent, the undefeated Sergey Kovalev, has an official record of 25-0-1 (23 KOs=92%) and he entered as the No.2 in the same weight class, he has fought twice in 2014 successfully defending his Wbo belt against Cedric Agnew (=Kovalev vs Agnew) and Blake Caparello (=Kovalev vs Caparello). Hopkins vs Kovalev is valid for the WBA, IBF and WBO World light heavyweight titles. Watch the video and rate this fight!