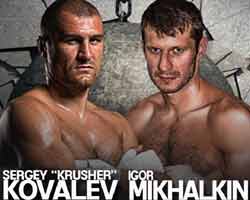 The current Wbo and Iba light-Hw champion Sergey Kovalev entered this fight with a professional boxing record of 31-2-1 (27 KOs=87%) and he is ranked as the No.2 light heavyweight in the world (currently the #1 in this division is Adonis Stevenson). “Krusher” Kovalev lost two consecutive bouts between 2016 and 2017, both with Andre Ward (Kovalev vs Ward I and Ward vs Kovalev II) but then he has beat Vyacheslav Shabranskyy (Sergey Kovalev vs Vyacheslav Shabranskyy).
His opponent, the Ibo light-Hw champion Igor Mikhalkin, has an official record of 21-1-0 (9 knockouts) and he entered as the No.11 in the same weight class. He suffered his only loss when he faced Aleksy Kuziemski in 2010, since then he has won ten consecutive bouts beating Yevgeni Makhteienko, Thomas Oosthuizen (Oosthuizen vs Mikhalkin) and Doudou Ngumbu in 2017 (Igor Mikhalkin vs Doudou Ngumbu 3). Kovalev vs Mikhalkin is valid for the WBO World light heavyweight title (Kovalev’s first defense). Watch the video and rate this fight!