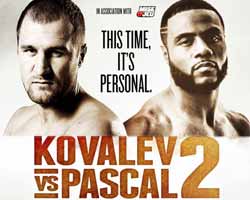 The undefeated Sergey Kovalev entered this fight with a pro boxing record of 28-0-1 (25 KOs=89%) and he is ranked as the No.1 light heavyweight in the world while his opponent, the former Wbc light-Hw champion Jean Pascal, has a record of 30-3-1 (17 knockouts) and he entered as the No.8 in the same weight class. In their first fight the ‘Krusher’ Kovalev beat Pascal in one of the best boxing fights of the year (held on March 14, 2015 Kovalev vs Pascal I), after this bout the Russian defeated Nadjib Mohammedi (=Kovalev vs Mohammedi) while the Canadian won over Yunieski Gonzalez (=Pascal vs Gonzalez). Kovalev vs Pascal 2 is valid for the IBF, WBA and WBO World light heavyweight titles (all held by Kovalev). Watch the video and rate this fight!