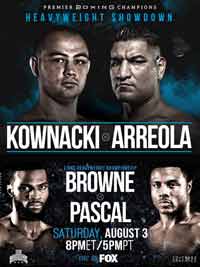 Review by AllTheBestFights.com: 2019-08-03, great performance by both boxers: Adam Kownacki vs Chris Arreola is close to get four stars!

The undefeated Adam Kownacki entered this fight with a perfect boxing record of 19-0-0 (15 KOs=79%) and he is ranked as the No.11 heavyweight in the world. In his last three fights he has won over Iago Kiladze (Adam Kownacki vs Iago Kiladze), Charles Martin (Adam Kownacki vs Charles Martin) and Gerald Washington (Adam Kownacki vs Gerald Washington).
His opponent, Chris Arreola, has an official record of 38-5-1 (33 KOs=87%) and he entered as the No.41 in the same weight class. He was defeated by Deontay Wilder in 2016 (Deontay Wilder vs Chris Arreola) but then he has beat Maurenzo Smith and Jean Pierre Augustin. Kownacki vs Arreola is the main event of the evening. Watch the video and rate this fight!