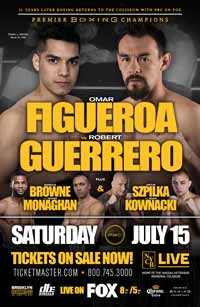 Review by AllTheBestFights.com: 2017-07-15, pretty good fight between Artur Szpilka and Adam Kownacki: it gets three stars.

Artur Szpilka entered this fight with a professional record of 20-2-0 (15 KOs=75%) but he is not ranked as he hasn’t fought since January 16, 2016 when he was defeated by Deontay Wilder (=Wilder vs Szpilka).
His opponent, the undefeated Adam Kownacki, has a perfect boxing record of 15-0-0 (12 KOs=80%) and he entered as the No.32 in the same weight class. He has already fought once in 2017 winning over Joshua Tufte. Adam Kownacki vs Artur Szpilka is on the undercard of Omar Figueroa Jr vs Robert Guerrero. Watch the video and rate this fight!