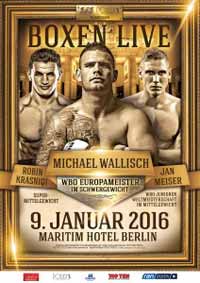 Review by AllTheBestFights.com: 2016-01-09, great performance by both boxers: Robin Krasniqi vs Cagri Ermis gets three stars.

Robin Krasniqi entered this fight with a pro boxing record of 44-4-0 (17 knockouts) and he is ranked as the No.26 super middleweight in the world. He fought twice last year losing to Juergen Braehmer (=Braehmer vs Krasniqi) but then he came back to win against Vaclav Polak.
His opponent, Cagri Ermis, has a record of 18-9-2 (5 knockouts) and he entered as the No.45 in the same weight class. He suffered two consecutive defeats in 2010, against Hassan N’Dam N’Jikam and Goekalp Oezekler, but since then he has won ten consecutive bouts beating Juergen Doberstein in his last one. Krasniqi vs Ermis is on the undercard of Michael Wallisch vs Ivica Bacurin. Watch the video and rate this fight!