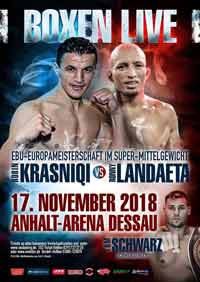 Review by AllTheBestFights.com: 2018-11-17, fight not particularly good between Robin Krasniqi and Ronny Alexander Landaeta: it gets two stars.

Robin Krasniqi entered this fight with a boxing record of 48-5-0 (17 knockouts) and he is ranked as the No.22 super middleweight in the world. He lost to Arthur Abraham last year (Arthur Abraham vs Robin Krasniqi) but then he has won over Bartlomiej Grafka and Stanislav Kashtanov (Robin Krasniqi vs Stanislav Kashtanov).
His opponent, the undefeated Ronny Alexander Landaeta, has a perfect record of 16-0-0 (10 knockouts) and he entered as the No.36 in the same weight class. He has also fought twice in 2018 beating Bruno Tavares and Anatoli Hunanyan. Krasniqi vs Landaeta is valid for the EBU European super middleweight title. Watch the video and rate this fight!

(Free embeddable video hosted on Youtube and not uploaded by AllTheBestFights)
https://www.youtube.com/watch?v=aVfLZlWovi4