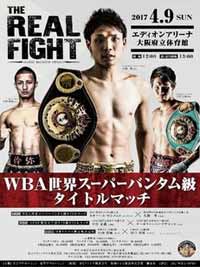 Review by AllTheBestFights.com: 2017-04-09, fight not so exciting between Nehomar Cermeno and Shun Kubo: it gets two stars.

The Wba champion Nehomar Cermeno entered this fight with a pro boxing record of 26-5-1 (15 knockouts) and he is ranked as the No.8 super bantamweight in the world (currently the #1 in this division is Guillermo Rigondeaux). He suffered his last loss when he faced Alexander Bakhtin in 2012, since then he has collected six victories and one no-contest beating Anurak Thisa (=Cermeno vs Thisa) and XiaoJun Qiu in his last two (=Cermeno vs Qiu 2).
His opponent, the undefeated Shun Kubo, has a perfect record of 11-0-0 (8 knockouts) and he entered as the No.64 in the same weight class. He fought twice last year winning over Benjie Suganob and Jin Wook Lim. Shun Kubo vs Nehomar Cermeno is valid for the WBA World super bantamweight title (Cermeno’s third defense). Watch the video and rate this fight!