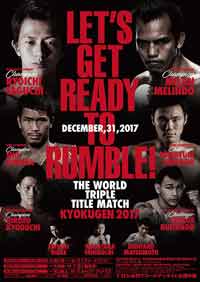 Review by AllTheBestFights.com: 2017-12-31, pretty good fight between Hiroto Kyoguchi and Carlos Buitrago: it gets three stars.

The undefeated Ibf champion Hiroto Kyoguchi entered this fight with a perfect boxing record of 8-0-0 (6 KOs=75%) and he is ranked as the No.5 minimumweight in the world. He has already fought three times in 2017 winning over Armando de la Cruz, Jonathan Refugio and Jose Argumedo (=Argumedo vs Kyoguchi).
His opponent, the former interim Wbo champion Carlos Buitrago, has an official record of 30-2-1 (17 knockouts) but he is not ranked as he hasn’t fought since October 15, 2016 when he defeated Noe Medina. Before this bout he had also beat Roger Collado in May and he was defeated by current #1 Knockout CP Freshmart in February (=CP Freshmart vs Buitrago 2). Kyoguchi vs Buitrago is valid for the IBF World minimumweight title (Kyoguchi’s first defense); undercard of Milan Melindo vs Ryoichi Taguchi. Watch the video and rate this fight!