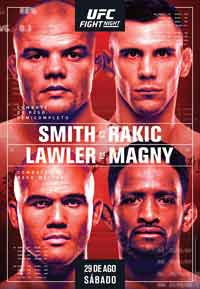 Review by AllTheBestFights.com: 2020-08-29, pretty good fight between Ricardo Lamas and Bill Algeo: it gets three stars (UFC Fight of the Night).
The black belt in Brazilian jiu-jitsu Ricardo Lamas entered this fight with a mma record of 19-8-0 (58% finishing rate) and he is ranked as the No.19 featherweight in the world but he won just one out of his last four bouts, against Darren Elkins in 2018 (Darren Elkins vs Ricardo Lamas); after this fight he has lost to Calvin Kattar (Ricardo Lamas vs Calvin Kattar).
His opponent, Bill Algeo, has an official record of 13-4-0 (69% finishing rate) and he entered as the No.118 in the same weight class. He was defeated by Brendan Loughnane last year but he comes back to win against Tim Dooling in 2020. Algeo vs Lamas is on the undercard of Anthony Smith vs Aleksandar Rakic – UFC Fight Night 175 (also known as UFC Vegas 8). Watch the video and rate this fight!