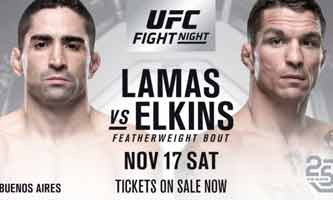 Review by AllTheBestFights.com: 2018-11-17, some good single shots between Darren Elkins and Ricardo Lamas but it is not enough to get three stars: it gets two.

Darren Elkins entered this fight with a professional record of 24-6-0 (50% finishing rate) and he is ranked as the No.12 featherweight in the world. He has already fought twice in 2018 beating Michael Johnson (Darren Elkins vs Michael Johnson) and losing to Alexander Volkanovski (Darren Elkins vs Alexander Volkanovski).
His opponent, the black belt in Brazilian jiu-jitsu Ricardo Lamas, has a mma record of 18-7-0 (56% finishing rate) and he entered as the No.14 in the same weight class but he comes off two consecutive losses, against Josh Emmett (Ricardo Lamas vs Josh Emmett) and Mirsad Bektic (Ricardo Lamas vs Mirsad Bektic); before these two bouts he had beat Jason Knight (Lamas vs Knight). Lamas vs Elkins is on the undercard of Neil Magny vs Santiago Ponzinibbio – UFC Fight Night 140. Watch the video and rate this fight!

(Free embeddable video hosted on Youtube and not uploaded by AllTheBestFights)
https://www.youtube.com/watch?v=qbKY4qhD7Sg