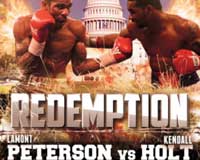 Review: 2013-02-22, very exciting second part of the fight with two knockdowns: Lamont Peterson vs Kendall Holt is close to get four stars. Kendall Holt ranked as the No.6 light welterweight in the world, entered the fight with a record of 28-5-0 while Lamont Peterson had a record of 30-1-1 (Peterson is not ranked as he hasn’t fought since December 10, 2011 when he defeated Amir Khan in one of the best boxing fights of 2011). Peterson vs Holt is valid for the IBF light welterweight title. Watch the video!