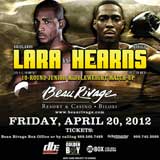 Review: 2012-04-20, three stars for Erislandy Lara vs Ronald Hearns thanks to three knockdowns in the first round (fight ended by TKO in the first period). Erislandy Lara ranked as the No.10 light middleweight in the world, entered the fight with a record of 15-1-1 while Ronald Hearns had a record of 26-2-0. Lara vs Hearns is on the undercard of Jermain Taylor vs Caleb Truax. Watch the video!