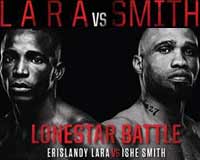 Review: 2014-12-12, fight not particularly exciting between Erislandy Lara and Ishe Smith: it gets two stars. Erislandy Lara entered this fight with a professional boxing record of 19-2-2 (12 knockouts) and he is ranked as the No.2 light middleweight in the world, he has won the interim Wba title at the end of 2013 defeating Austin Trout (=Lara vs Trout) but then he lost to #1 Saul ‘Canelo’ Alvarez (via split decision, Saul Alvarez vs Lara).
His opponent, Ishe Smith, has an official record of 26-6-0 (12 knockouts) and he entered as the No.5 in the same weight class, he suffered his last defeat last year when he faced Carlos Molina losing his Ibf belt (via split decision, Smith vs Molina); after this bout he came back to win beating Ryan Davis (=Smith vs Davis). Lara vs Smith is valid for the WBA light middleweight title. Watch the video and rate this fight!