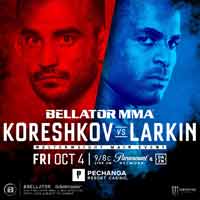 Review by AllTheBestFights.com: 2019-10-04, good fight between Andrey Koreshkov and Lorenz Larkin: it gets three stars.

The former Bellator Ww champ Andrey Koreshkov entered this fight with a pro record of 22-3-0 (68% finishing rate) and he is ranked as the No.32 welterweight in the world. He lost to Douglas Lima last year (Douglas Lima vs Andrey Koreshkov 3) but he came back to win against Michael Jasper in 2019 (Andrey Koreshkov vs Mike Jasper).
His opponent, Lorenz Larkin, has an official mma record of 20-7-0 (55% ko/tko victory rate – he has never won via submission) and he entered as the No.43 in the same weight class. He lost two consecutive fights in 2017, against Douglas Lima (Lima vs Larkin) and Paul Daley (Larkin vs Daley), but then he has beat Fernando Gonzalez (Lorenz Larkin vs Fernando Gonzalez) and Ion Pascu. Koreshkov vs Larkin is the main event of Bellator 229. Watch the video and rate this fight!