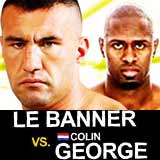 Review: 2014-08-04, pretty good finish but it is not enough to get three stars: Jerome Le Banner vs Colin George gets two. The 41-year-old Jerome Le Banner entered this fight with a pro kickboxing record of 78-22-2 (63 KOs=80%) and he is ranked as the No.12 heavyweight in the world, he lost his last bout in 2013, against Sergei Kharitonov (=Le Banner vs Kharitonov) but he came back to victory in 2014 defeating Lucian Danilencu (=Le Banner vs Danilencu).
On the original fight card Le Banner was expected to face Daniel Sam but he was replaced by Colin George (unfortunately we don’t know his record). Le Banner vs George is the main event of Fight Night Saint Tropez II. Watch the video and rate this fight!