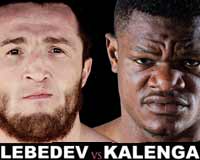 Review by AllTheBestFights.com: 2015-04-10, pretty good fight between Denis Lebedev and Youri Kalenga: it gets three stars.

Denis Lebedev entered this fight with a pro boxing record of 26-2-0 (20 knockouts) and he is ranked as the No.5 cruiserweight in the world (currently the #1 in this division is Grigory Drozd). He suffered his last defeat in 2013 when he faced Guillermo Jones (=Lebedev vs Jones) but he came back to win in 2014 beating Pawel Kolodziej (=Lebedev vs Kolodziej).
His opponent, Youri Kayembre Kalenga, has a record of 21-1-0 (14 knockouts) and he entered as the No.9 in the same weight class. His only loss occurred in 2013, against Arturs Kulikauskis, after this bout he has won five consecutive fights winning the interim WBA belt against Mateusz Masternak (=Masternak vs Kalenga) and defending it with Denton Daley in his last bout (=Daley vs Kalenga). Lebedev vs Kalenga is valid for the WBA World cruiserweight title. Watch the video and rate this fight!