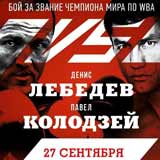 Review: 2014-09-27, good finish between Denis Lebedev and Pawel Kolodziej: this fight gets three stars. Denis Lebedev entered this fight with a pro boxing record of 25-2-0 (19 knockouts) but he is not ranked as he hasn’t fought since May 17, 2013 when he was defeated by Guillermo Jones (after the bout Jones tested positive for a banned substance and he was stripped of the Wba belt, Lebedev vs Jones).
His opponent, the undefeated Pawel Kolodziej, has a perfect record of 33-0-0 (18 knockouts) and he entered as the No.15 cruiserweight in the world but he has never fought for a world title. Lebedev vs Kolodziej is valid for the WBA World cruiserweight title; undercard of Krzysztof Wlodarczyk vs Grigory Drozd. Watch the video and rate this fight!

Where: Dynamo Palace of Sports in Krylatskoye, Moscow, Russia