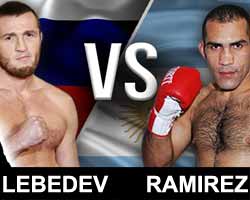 Review by AllTheBestFights.com: 2016-05-21, fight not so exciting between Denis Lebedev and Victor Ramirez: it gets two stars.

Denis Lebedev entered this fight with a boxing record of 28-2-0 (21 KOs=75%) and he is ranked as the No.3 cruiserweight in the world (currently the #1 in this division is Krzysztof Glowacki). He lost to Guillermo Jones in 2013 (=Lebedev vs Jones) but then he has won three fights beating Youri Kayembre Kalenga (=Lebedev vs Kalenga) and Lateef Kayode in 2015 (=Lebedev vs Kayode).
His opponent, the former Wbo Cw champion Victor Emilio Ramirez, has an official record of 22-2-1 (17 KOs=77%) and he entered as the No.10 in the same weight class. He suffered his last defeat when he faced Marco Huck in 2009, since then he has collected 7 victories and one draw, against Ovill McKenzie in his last bout (=McKenzie vs Ramirez). Lebedev vs Ramirez is valid for the IBF and WBA Super World cruiserweight titles (on the original fight card the main event was Deontay Wilder vs Alexander Povetkin but the Russian failed a drugs test and the fight would be postponed). Watch the video and rate this fight!