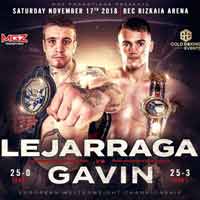 Review by AllTheBestFights.com: 2018-11-17, very nice finish between Kerman Lejarraga and Frankie Gavin: it gets three stars.

The undefeated Kerman Lejarraga entered this fight with a perfect record of 26-0-0 (21 KOs=81%) and he is ranked as the No.14 welterweight in the world. In his last three bouts he has won over Jose Del Rio, Bradley Skeete (Bradley Skeete vs Kerman Lejarraga) and Johnny Navarrete.
His opponent, the 2007 world amateur champion Frankie Gavin, has a boxing record of 26-3-0 (15 knockouts) and he entered as the No.29 in the same weight class. He lost to Sam Eggington in 2016 (Frankie Gavin vs Sam Eggington) but then he has won three bouts beating Kevin McCauley in 2018. Lejarraga vs Gavin is valid for the EBU European welterweight title (but just for Lejarraga since Gavin weighed in above championship limit). Watch the video and rate this fight!