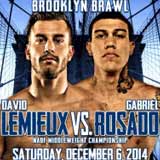 Review: 2014-12-06, nice and tough fight between David Lemieux and Gabriel Rosado: it gets three stars. David Lemieux entered this fight with a pro boxing record of 32-2-0 (30 KOs=93%) and he is ranked as the No.13 middleweight in the world, he suffered two consecutive defeats in 2011 when he was just 22 years old: against Marco Antonio Rubio (=Rubio vs Lemieux) and Joachim Alcine (=Alcine vs Lemieux); since then he has won seven consecutive bouts beating Fernando Guerrero in his last fight (=Lemieux vs Guerrero).
His opponent, Gabriel Rosado, has a record of 21-8-0 (13 knockouts) and he entered as the No.31 light middleweight but he comes off three defeats and one no-contest; he lost to Jermell Charlo in his last bout (=Charlo vs Rosado). Lemieux vs Rosado is the main event of the evening. Watch the video and rate this fight!