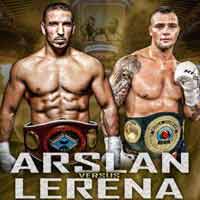 Review by AllTheBestFights.com: 2020-02-08, pretty good fight between Kevin Lerena and Firat Arslan: it gets three stars.

The Ibo Cw champion Kevin Lerena entered this fight with a record of 24-1-0 (11 knockouts) and he is ranked as the No.7 cruiserweight in the world (currently the #1 in this division is Mairis Briedis). He suffered his only loss when he faced Johnny Muller in 2014, since then he has won 13 consecutive bouts beating Artur Mann (Kevin Lerena vs Artur Mann), Vasil Ducar and Sefer Seferi in 2019.
His opponent, the former Wba champ Firat Arslan, has an official boxing record of 47-8-3 (32 knockouts) and he entered as the No.20 in the same weight class. He suffered his last loss when he faced Yoan Pablo Hernandez in 2014 (Hernandez vs Arslan), since then he has collected one draw and 13 victories beating Ricardo Marcelo Ramallo, Cesar David Crenz and Sami Enbom last year. Lerena vs Arslan is valid for the IBO World cruiserweight title (Lerena’s sixth defense). Watch the video and rate this fight!