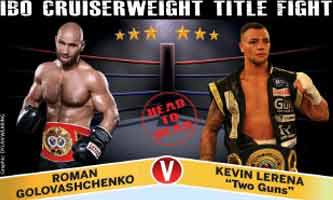 Review by AllTheBestFights.com: 2018-06-02, tough exchanges between Kevin Lerena and Roman Golovashchenko: it gets three stars.

The Ibo Cw champion Kevin Lerena entered this fight with a professional record of 20-1-0 (9 knockouts) and he is ranked as the No.9 cruiserweight in the world (currently the #1 in this division is Oleksandr Usyk). He suffered his only loss when he faced Johnny Muller in 2014, since then he has won nine consecutive bouts beating Sergio Ramirez, Youri Kayembre Kalenga (Kevin Lerena vs Youri Kayembre Kalenga) and Dmytro Kucher in his last three (Kevin Lerena vs Dmytro Kucher).
His opponent, Roman Golovashchenko, has a boxing record of 19-1-0 (17 KOs=89%) and he entered as the No.25 in the same weight class. His last and only loss occurred in 2008 when he faced Varol Vekiloglu, since then he has collected 15 victories and one no-contest defeating Kai Kurzawa and Zoltan Petranyi in 2017. Lerena vs Golovashchenko is valid for the IBO World cruiserweight title (Lerena’s second defense). Watch the video and rate this fight!