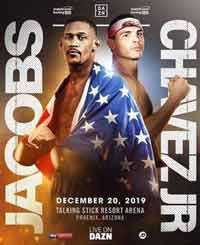 Review by AllTheBestFights.com: 2019-12-20, good pace between Liam Smith and Roberto Garcia: it gets three stars.

The former Wbo light-Mw champion Liam Smith entered this fight with a professional record of 28-2-1 (16 knockouts) and he is ranked as the No.9 middleweight in the world (currently the #1 in this division is Gennady Golovkin). He lost to Jaime Munguia last year (Jaime Munguia vs Liam Smith) but then he has won over Sam Eggington (Liam Smith vs Sam Eggington) and Mario Alberto Lozano (Liam Smith vs Mario Alberto Lozano).
His opponent, Roberto Garcia, has a boxing record of 42-4-0 (25 knockouts) and he entered as the No.26 in the same weight class. He lost to Martin Murray in 2018 (Martin Murray vs Roberto Garcia) but he came back to win against Juan Jose Francisco Marquez Solano in 2019. Smith vs Garcia is on the undercard of Daniel Jacobs vs Julio Cesar Chavez Jr. Watch the video and rate this fight!