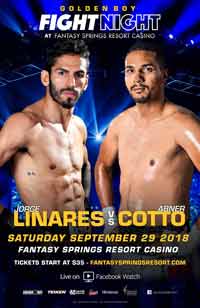 Review by AllTheBestFights.com: 2018-09-29, pretty good fight between Jorge Linares and Abner Cotto: it gets three stars.

The former world champion in three different weight classes Jorge Linares entered this fight with a boxing record of 44-4-0 (27 knockouts) and he is ranked as the No.3 lightweight in the world but he comes off the loss against current #1 Vasyl Lomachenko (Jorge Linares vs Vasyl Lomachenko). Before this bout, in January 2018, he had won over Mercito Gesta (Jorge Linares vs Mercito Gesta).
His opponent, Abner Cotto (cousin of Miguel Cotto), has an official record of 23-3-0 (12 knockouts) and he entered as the No.73 super lightweight. He suffered his last loss when he faced Javier Fortuna in 2014 (Javier Fortuna vs Abner Cotto), since then he has won five consecutive fights beating Samuel Santana in his last one. Linares vs Cotto is the main event of the evening. Watch the video and rate this fight!