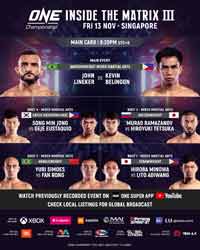 Review by AllTheBestFights.com: 2020-11-13, pretty good fight between John Lineker and Kevin Belingon: it gets three stars.
John Lineker entered this fight with a record of 32-9-0 (57% finishing rate) and he is ranked as the No.29 featherweight in the world. He fought twice last year losing to Cory Sandhagen (John Lineker vs Cory Sandhagen) and beating Muin Gafurov (John Lineker vs Muin Gafurov).
His opponent, the black belt in Wushu and former ONE Bw champion Kevin Belingon, has a mma record of 20-7-0 (55% finishing rate) and he entered as the No.39 in the same weight class. In his last three fights he has faced always Bibiano Fernandes beating the Brazilian in their first one (Fernandes vs Belingon I) but then he lost the other two (Bibiano Fernandes vs Kevin Belingon 2 and Bibiano Fernandes vs Kevin Belingon 3). Belingon vs Lineker is the main event of “ONE Championship: Inside the Matrix 3”. Watch the video and rate this fight!

Event: ONE Championship: Inside the Matrix 3